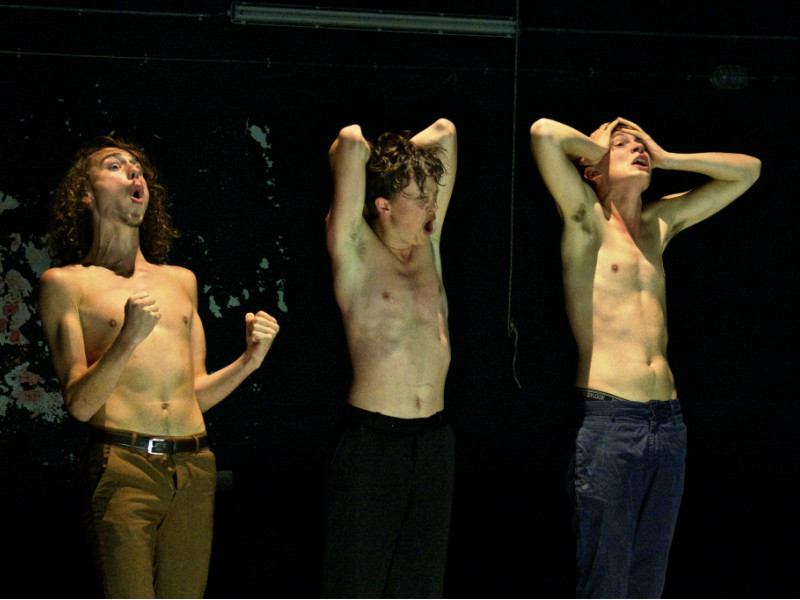 Every year Tweetakt invites a performing artist to create a work of visual art for Fort Ruigenhoek. In previous years Benjamin Verdonck, Jetse Batelaan, Ugo Dehaes and Liesbeth Gritter were asked. This year we have asked Louis Janssens and Ferre Marnef, two young theatre makers who excel at making conceptual performances. Together they are Desnor. The duo is not only creating two works of art for Fort Ruigenhoek, but they are also at Tweetakt with their show Serenade.

The two works both have the same sentence as their title. The duo borrowed this sentence from the American artist Lawrence Weiner, because they are both huge fans of his. Instead of making objects, Weiner places words and sentences in public space and writes texts in small books. His playful, almost childlike way of interrogating the world is what appeals to Janssens and Marnef.

The film’s subject matter is directly derived from the rehearsal process for the show Galileo, which was shown at Tweetakt two years ago. During rehearsals, Janssens and Marnef were working with an enormous piece of cardboard and cutting arrows from it. The idea ultimately didn’t make it into the show, but it is now given its own platform at Fort Ruigenhoek.

This work investigates whether we as humans could do without words. The most human thing in the world is words, it is the medium we use to express ourselves. Or could we do without? If language is taken out of the equation, what is humanly possible to say? Would we choke in an avalanche of emotion? How would we direct those feelings?

Desnor consists of Louis Janssens and Ferre Marnef. Both attended the Koninklijke Academie voor Schone Kunsten (KASK) in Ghent. Janssens in drama and Marnef in graphic design. Desnor are no newcomers to Tweetakt. In 2019 Louis Janssens with Timo Sterckx presented the show The Greatest Show on Earth and in 2017 he presented his dance solo Ouvertures. Janssens and Marnef presented #BOS  in 2016 and Galileo in 2018.