Soft is the new tough!

Three acrobats challenge each other in a game of physicality: rough and spectacular one moment, fluid and tender the next. They fight, jump, dive, and catch each other. Banding up to do dangerous things, while coming dangerously close to each other. Softies does away with any cliché views on what is tough and what is weak-kneed, on how girls should behave or boys, on what circus should look like or dance. A virtuoso dance and circus performance that is all about having the guts to be vulnerable.

Review
“The word ‘softie’ may have a negative connotation, but being gentle and friendly with each other is much more fun than being tough and aggressive.” – Theaterkrant

About the makers
Hanna Mampuys is a physical performer, acrobat and circus maker. She started as a young dancer at  fABULEUS, founded the circus collective Deux Sans Trois in 2013, and made the show TYPO, with which she toured at home and abroad for several years. Now she is working with Toon Van Gramberen under the name There There Company. Together they create shows that straddle the line between circus and dance. Hanna is also a dancer with Cie Woest and works as a coach and jury member at Codarts Circus school in Rotterdam.

fABULEUS from Leuven produce dance and theatre shows. Its central focus is on artistic collaboration between talented young people and experienced artists. With their productions they target wide audiences of all ages, with a special focus on children and adolescents. In 2016 fABULEUS won the Ultima voor de Podiumkunsten, the culture prize awarded by the Vlaamse Gemeenschap. 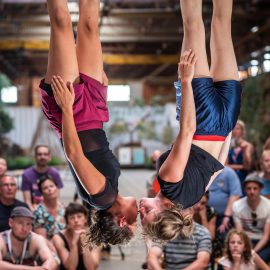