A stirring concert derails in a dance performance, with music as a motor and inspiration as fuel.

A live band consisting of dancers and musicians sings about being stuck and shaking loose, reaching for the top and hitting rock bottom. One flies across the others’ instruments and seconds later they are engaged in a poetic dance duet. A rock ‘n roll ritual, with music as a driving force and soul for fuel.

Shake Shake Shake is all about feeling alive in a world that barely allows you control over your attention span. It is about music as an infectious invitation to move and shake all the misery out of your bones. Like in soul, punk and perhaps every musical movement that ever voiced the counter culture. But first and foremost, Shake Shake Shake is about joining forces and finding our own, alternative direction.

“They do this (…) with inexhaustible energy, great musicality, wonderful polyphony and a dance act that looks unchoreographed but is in fact a feat of great precision.” – Dagblad van het Noorden

De Dansers create ‘dance concerts’: organic, energetic gatherings where modern dance and live music meet. The group are experts in creating accessible dance shows and performs for audiences of all ages. They address the lust for life that children have and reconnect grownups with their long-forgotten desire to let go, touch and be touched, to counter the digitalisation and the growing individualism. De Dansers are led by Josephine van Rheenen (choreographer/dancer) and Guy Corneille (musician/performer). The Utrecht-based company came to Tweetakt before, with shows like The Basement (2016) and Binnenbeest (2017). A short, work-in-progress version of Shake Shake Shake was presented at Tweetakt 2019. 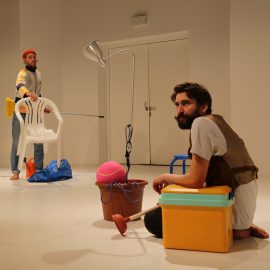