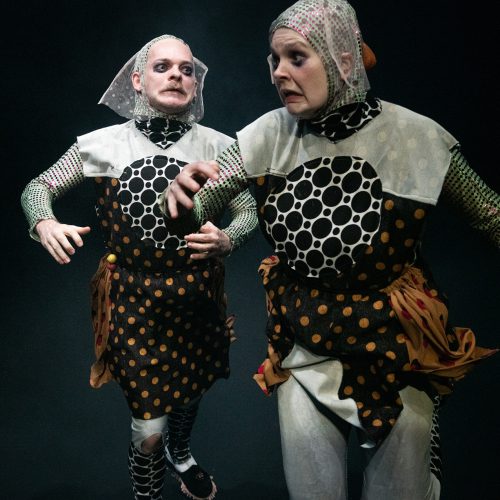 In Folks&Fools, Maxim Storms and Lobke Leirens play on the myth of the scapegoat. They transform into two brash figures, chosen by their tribe to fulfill a fated quest.

Failing bravely, the rogues follow each other past cruel barriers in an alien universe. Folks&Fools becomes a mysterious brew of legendary cries, cosmic villains and primary innovators in decline.

“It doesn’t matter if our characters are human or animal.” – Subbacultcha

About the makers
Lobke Leirens and Maxim Storms explore the absurdity of both the cosmic and the sinister. At Theater aan Zee in 2014, they wowed audiences with the labyrin­thine produc­tion KROCHT, based on Dante Alighieri’s Inferno. In 2017, they made Another One, which was selected by Circuit X and toured in Belgium and abroad. After their selection by Big In Belgium 2018, they were awarded the presti­gious Total Theatre Award in Edinburgh.