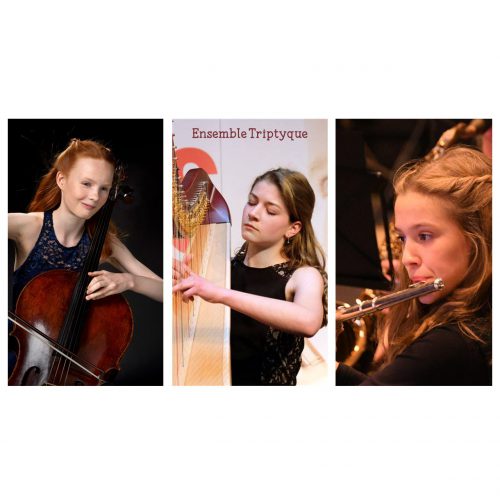 Merle van der Lijke (16) studies at the Academy of Musical Talent (AMT). She plays on a harp that is made available by the National Musical Instruments Fund (NMF). Merle has already won several prizes, including a 1st and 2nd prize at the regional finals of the Princess Christina Competition (PCC), the laureate prize and a 2nd prize in the National Final together with the Ruud van der Meer prize for her stage presence.

Sarah van der Lijke (14)  is a member of the Neflac Ensemble, which is part of the Dutch Flute Academy. In September she will start at the AMT. Sarah won the Flute Factor at the age of 11, an international flute competition for youth up to and including 13 years of age. Together with her sister Merle, she played solo with the Nijmegen Symphony Orchestra and played solo with the Excelsior wind orchestra and the Dierense Harmonie. Recently she won a 2nd prize at the regional final of the PCC.

Fama Koning (16) studies at the Academy of Musical Talent (AMT). At the age of 11 she won second prize at the Heuvelrug competition. In the following years she was a prize winner in the National Music Competition, the Britten Cello Competition and the Princess Christina Competition. In the summer of 2019 she won a final prize in the Concertgebouw Competition. She subsequently won the Labberté-Hoedemaker Prize and the Emmy Verheij Award.